Design pattern is a general repeatable solution to a commonly occurring problem in software design. A design pattern isn’t a finished design that can be transformed directly into code. It is a description or template for how to solve a problem that can be used in many different situations.

If you are new to programming, probably you won’t hear or use “design pattern” concept a lot for the first couple months/years. But after some time, when you start to write more meaningful programs, you’ll definitely need to use some tested and proven design patterns in your code. Design patterns can speed up the development process by providing tested, proven development paradigms. Effective software design requires considering issues that may not become visible until later in the implementation. Reusing design patterns helps to prevent subtle issues that can cause major problems and improves code readability for coders and architects familiar with the patterns. 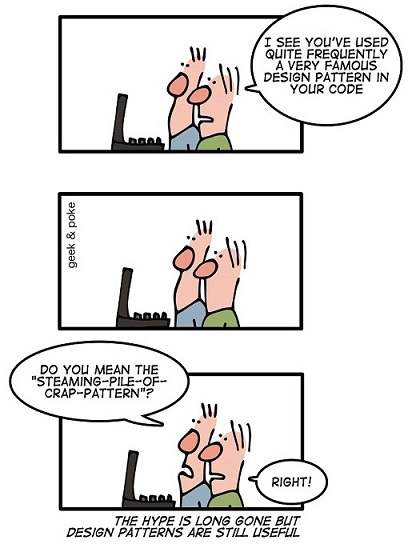 In the case of object-oriented programming, design patterns are generally aimed at solving the problems of object generation and interaction, rather than the larger scale problems of overall software architecture. They give generalized solutions in the form of templates that may be applied to real-world problems.

These design patterns are all about Class and Object composition. Structural class-creation patterns use inheritance to compose interfaces. Structural object-patterns define ways to compose objects to obtain new functionality.